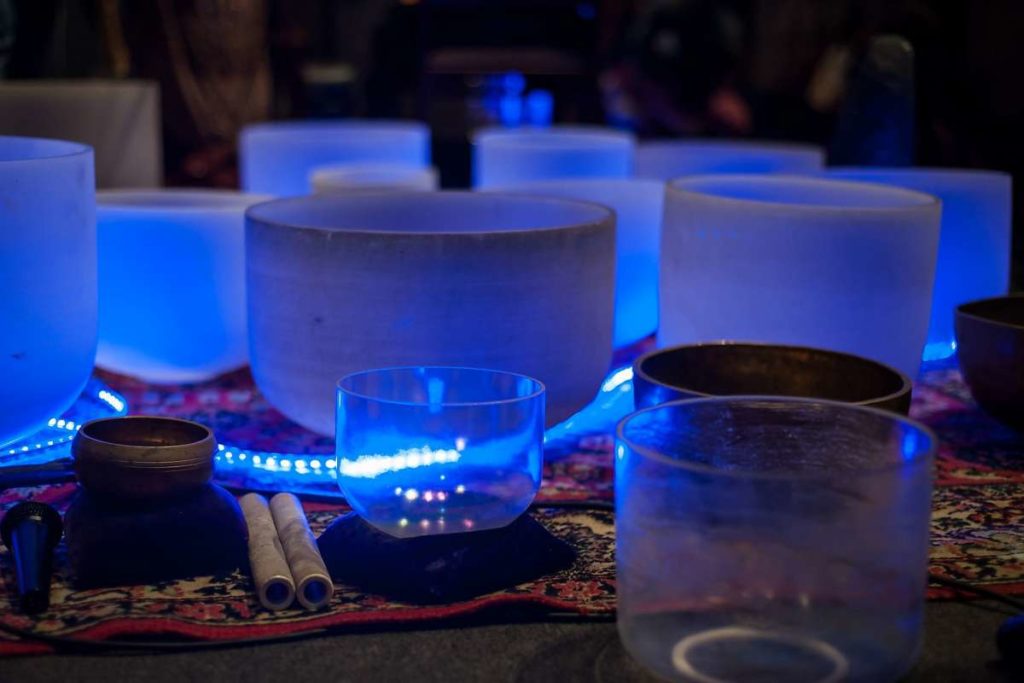 Written by Jennifer Maerz on July 14, 2016 for sfchronicle.com.

Quoted from article: “On a Friday evening in May, 1,000 people lined the steps of Grace Cathedral, clutching blankets, pillows, yoga mats, eye masks and sleeping bags, awaiting entry to a sold-out event. A latecomer bounded up the steps, her disco jacket reflecting the scene in thousands of silver sequins. Her outfit offered flashes of color against the Patagonia-vested seniors and twentysomethings outfitted for camping trips.

Everyone here paid roughly $25 to experience a “sound bath.” That’s the popular name for the highly relaxing, deeply meditative and occasionally psychedelic experience involving practitioners playing crystal bowls, Tibetan singing bowls and planetary gongs, among other healing and ritualistic instruments on the night’s lineup. Guests absorbed this cosmic concert while lying bundled up on the floor. The pop-up sound bath is one of many eccentric meditation experiences that San Franciscans are seeking out — and, popularity-wise, one of the fastest growing.

Once checked in, attendees spread their sleeping gear in the aisles of the cathedral, awaiting instruction from host Sound Meditation San Francisco. The group, led by San Francisco organizer Simona Asinovski and Los Angeles sound healer Guy Douglas, is bringing large-scale sound baths to sacred and uplifting spaces around the city. “We’re clear about not having any religious or spiritual context behind what we do,” said Asinovski, who met Douglas on Venice Beach in Los Angeles. “It’s just about you and your experience.”

The concept of healing through sound and music has been around for 70,000 years, said Silvia Nakkach, a Grammy-nominated musician, author and educator at the California Institute of Integral Studies, where she’s run the Sound, Voice, and Music Healing Certificate program for the past decade. “The shaman was the first one using sound to achieve energy in the body and mind,” she said.

Asinovski and Douglas first tested their pop-up sound bath concept on the public last December, when they sold out 350 tickets in 15 minutes. Asinovski said they’ve dramatically increased their audience with each event this year — from 500 to 800 guests at the San Francisco Bahá’í Center and the Hall of Flowers in Golden Gate Park, and now they’ve hit 1,000 attendees. Their next sound bath will be at St. Mary’s Cathedral.

Douglas became a sound healer after experiencing a sound bath 10 years ago and wanting to help others feel similarly recharged. He said sound baths put people into a “forced meditation” state. “It really pulls out the mind chatter,” he said, “and allows you to tap into that zero point of meditation.” The Grace Cathedral sound bath (or “Holistic Chamber of Sound” as Asinovski and Douglas call it) is the group’s biggest event yet. Kathryn Goetzke, founder of the depression research and education foundation iFred, describes the sound bath as a visceral experience: “It really went through your entire body,” she said. “I could feel it in every cell.”

The noises resonating from these instruments are so powerful they occasionally trigger unusual light shows in the mind. Another Grace Cathedral attendee, writer and speaker Veronica Belmont, said that she experienced “behind the eyelid” visuals. “I got kaleidoscopic effects that changed with the tonality or the sound that was occurring,” she said.

How to heal the ‘mass trauma’ of Covid-19
By Ed Prideaux posted on February 3rd, 2021 on BBC.com When the...
ADHD Medication ODs Rising in U.S. Kids, Teens
By Denise Mann HealthDay Reporter MONDAY, Dec. 7, 2020 (HealthDay...
PTSD: the plague of our times
PTSD (Post-Traumatic-Stress Disorder) is not only a growing concern for...
Go with the flow in a meditative sound bath
Written by Jennifer Maerz on July 14, 2016 for sfchronicle.com. Quoted...
Healing Narratives From the Holistic Healing Arts Retreat
This article examines the subjective experience of the Holistic Healing...